Long before joining the Dalhousie team that would create a revolutionary medical device for measuring lung capacity, Ubong Peters wanted to help people.

Growing up in Nigeria, he knew he wanted to be a medical doctor. He held onto that dream throughout his childhood and eventually took the first step towards that goal by completing a bachelor’s degree in genetics and biotechnology at Nigeria’s University of Calabar. But everything changed in his final year, when he was working on a research project that looked at the effects of various spices on fruitflies.

“The research professor I had at the time was very impressed with the work I did,” Peters says. “She told me that while medicine is a lofty ambition, she thought I should be approaching it at a much higher level. I should be at the level where I’m studying and finding interesting results, and providing those results to doctors so they can better manage the care of their patients.”

So when Peters graduated and the Nigerian government offered him a scholarship, he decided to follow her advice. He began looking for a school, focusing on Canada. That’s when he connected with Dr. Geoffrey Maksym, director of Dalhousie’s School of Biomedical Engineering.

“I had a call from someone who was representing Dalhousie on an international relations trip in Nigeria and she said, ‘I just met this wonderful nice young man who’s interested in biomedical engineering at Dalhousie and I’m wondering if there’s any interest in recruiting someone,’” Maksym says. “So we had a conversation over the phone and I was impressed enough to give him a try as a student in my lab group.”

In 2007, when he was 23, the Nigerian government agreed to sponsor Peters for six years so he could work on his masters and PhD with Maksym’s team. The team’s goal was to create a device that would measure lung capacity in a more accurate way than the current commonly used device, the spirometer.

If a patient is referred for a pulmonary function test (PFT), they’ll need to blow into the mouthpiece of the spirometer as hard and fast as possible, and the device measures the forced air.

“So it’s not really measuring how you breathe,” Peters says. “It’s measuring the volume of air you can expel from your lungs.”

The new device is the tremoFlo, which the Thorasys website touts as “a compact, portable medical device that permits effortless assessment of lung function in a wide range of patients, including young children and elderly patients.”

“Our device actually does the breathing for you,” Peters says. “You don’t have to be trained to do it and you don’t have to take a deep breath. All you have to do is breathe quietly into our device and it figures out how hard it is to move those small puffs of air into your lungs. If your lung function is normal, it should be easy to move those small puffs of air.”

But Peters’ journey hasn’t been without its challenges. And remarkably, culture shock seems to have been one of the easier hurdles. He missed his family and it took him some time to adjust to the cold weather, but his biggest challenges were financial.

“Although I received funding from the government of Nigeria, there were issues around the bureaucratic processes and getting the funds to me,” Peters says. “There would be months where I would basically just be waiting for them to process the funding and then get it over to me.”

After six years, the funding he was receiving from the Nigerian government ran out completely.

“I had to go through a lot,” Peters says, “Going through a program where I had to focus and do my best. It’s hard to do that when you have all these financial worries.”

But according to his friend Colin Campbell, who went to school with Peters but now works for the Nova Scotia government, Peters never let those challenges get in his way.

“I’m proud of him,” Campbell says, “because none of that distracted him from his work. He’s here because he wants to do good work and to educate himself, and he’s proud of it. I think some international students really get caught up in these issues and it affects their work. But for him, it doesn’t.”

Campbell elaborates on Peters’ focus. “You always know when he’s very serious about his work. I’d be like, ‘Ubong, I have three tickets to go this concert. Let’s go, they’re normally $75.’ And he’d say ‘I can’t, Colin. I need to study for this exam, I need to work on this paper.’”

“When he’s focused and he’s trying to get the work done, he gets the work done. And when it’s time to relax, he goes out and enjoys himself.”

Peters credits Maksym and Dalhousie, and his other funding sources, such as the National Science and Engineering Research Council of Canada, the Canadian Lung Association, and the Atlantic Canada Opportunities Agency, with helping him over the hurdles.

Referring to Maksym he says, “He has supported me every step of the way. Even when I had these challenges with the government, he has always been there for me. And Dalhousie, they always made sure I was never stranded. Whenever a situation got really, really bad and I needed help, they’d always be there to help me.”

According to Maksym, Peters also had to overcome some educational challenges.

“He needed more math training to join our program, so he started as a provisional accepted student,” Maksym says. “But he did those courses well and, in fact, every hurdle that’s been put in front of him, he’s been able to succeed. I’ve been quite impressed with his ability to persevere, because he didn’t have all the advantages some of the other students in our program had.”

Now that Peters is a landed immigrant, some of those challenges have cleared up because he now has easier access to the funds he needs to support himself.

“It’s been interesting,” Peters says, “but I’ve learned a lot through those challenges. I’ve learned to manage myself better and I’ve learned that no matter what sort of difficulties you face in life, you can always be successful if you persevere, you’re optimistic, and you’re passionate about what you do.”

We asked Peters what advice he’d give an international student coming to Halifax.

“Depending on the program you’re admitted to, you’ll have to be patient with yourself. I studied genetics and engineering for my undergraduate degree, and biomedical engineering was what I wanted to do, but there were gaps in my knowledge. I had to fill those gaps. So you have to be patient and take the time to learn the things you have to learn. Enjoy the process, enjoy the experience of learning.”

Sarah is a Halifax journalist and web writer. Her work has appeared in a variety of Canadian magazines, including Atlantic Business, East Coast Living, and Quill & Quire.
Previous Face-to-face is the best way to make connections
Next You don’t have to call him Tony 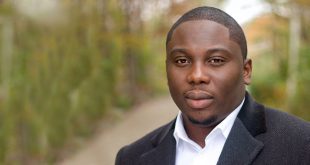